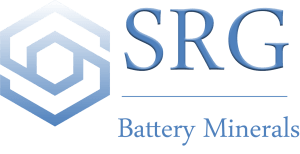 SRG is developing the Lola graphite deposit located in the Republic of Guinea, West Africa. The Lola graphite occurrence has a prospective surface outline of 3.22 km2 of continuous graphitic gneiss, one of the largest graphitic surface areas in the world.

The Gogota cobalt-nickel-scandium rich laterite deposit, originally discovered in 2010, is also located on the Lola project exploration permit. SRG continues to explore opportunities associated with these metals, which are currently in high demand. SRG owns 100% of the Lola exploration permit.

SRG’s Board of Directors and management team are seasoned resource industry professionals with extensive experience in the exploration, the development and the realization of world-class mining projects in Africa, North America and Europe. Management’s technical expertise also includes graphite-specific mining, processing and development.

Graphite, the Future of High-Tech

The global world graphite production has risen more than tenfold, from a base of 100,000 tpa in the early 1900s to an estimated 1.2 Mtpa in 2016 at a compound annual growth rate of over 2% according to USGS and the World Steel Association, and by 4% according to P&S Market Research.

Graphite demand world wide is set to rise significantly in the next 5-10 years from 2.4Mtpa to over 4Mtpa:

The World needs new sources of energy and is moving away from fossil fuel to a much cleaner energy for cars and energy accumulators. The developing world is evolving and natural flake graphite is the cornerstone of a new industrial revolution. It is anticipated that car manufacturers will increase their electric vehicle fleets by several folds over the next few years, further driving the demand for natural flake graphite. With this in mind, it is SGR’s intention to fast track the development of the Lola Graphite project.